How to get more details of the error when generated exe fails to run?

If the exe file is generated as "GUI application" or "Service application", the console is not visible, so it is not convenient to debug when it fails to run, we do not know what is wrong.

There are 2 ways to get more detailed informations about the exception description:

What is the mechanism of Jar2Exe?

Jar2Exe generate exe file by wrapping binary code around encrypted jar file. When a generated exe file runs, it starts the JVM and call the main method of entry point class. Jar2Exe does not compile java code into native code.

How to run generated exe on a computer without JRE installed?

You can pack the 'jre' directory and your generated exe file into one install file, and let the 'jre' be extracted with your main exe file into the same directory. Since the copied 'jre' is justed copied, not normally installed by JRE's install file, other softwares cannot find it, so this copied 'jre' is a private JRE and used by your generated exe only.

Why "Java Environment not found" when generated exe runs?

1. JRE is required when generated exe runs. If you have not installed JRE, you can download it from http://www.java.com.

3. On Linux, gcj is not supported.

Can generated exe file be re-encrypted by third-party softwares?

You can uncheck the "Self checksum" box at Step 6: Output if Jar2Exe is ACTIVATED, and then you can re-encrypt generated exe by third-party softwares.

Same as to be re-encrypted, you need to unckeck "Self checksum" box at Step 6: Output, and then generated exe can be signed by 'signtool.exe' etc.

You're on a 64-bit system, and don't have 32-bit library support installed. You can install it like this:

Where can I find the program version of Jar2Exe?

About menu is here: 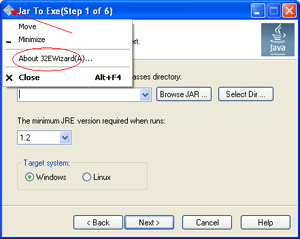 Is there a free edition of Jar2Exe with basic features only?

Please download the recent version, there is an option to "run as admin" at the step 6.

I have a java program which I have successfully converted into a jar.  When I use JAR2EXE, and try to execute the result, iget the message  "The Main Startup Class Could not be found".

As a console application the fault is

(My main class is Baboon)

This seems odd, because yesterday the trial version worked. Then I registered it and ...

The error message "unsupportedClassVersionError" means that, the JRE to run with is lower than the JDK to compile with.

You can use a lower version of JDK to compile, or specify a "-target" version when compile.

Please refer to the "-target" argument of 'javac'.

I can start the exe as console app, but not at service.  When I start the service, this is the error.

In My application, there is an activation mechanism, which uses BountyCastle (bcs.jar) for encryption and decryption. If I include bcs.jar while constructing the output .exe of my application, it won't give any problems. But when I activate it, it gives out exception related to BountyCastle

usually this error occurs if the used bcs.jar is extracted, because that way, the Signature of encryption is lost( I think if you google this exception, you can find out about this exception). This can be solved if we don't extract the bcs.jar and just use it from an external source as a jar file. So is there anyway to use the depending jar files without wrapping them or use them from an external source.

In the configuration of generated exe file, you can use 'classpath' to add depended jar files as classpath : http://www.jar2exe.com/createdexe/config/classpath

I googled this message, it seems there are much articles discussing this topic. So, please take a try of 'classpath' first. If your problem not resolved or you think I did not understand your question, please contact me.

I have jar file that work depends on my dynamic link library, and it works fine when I execute the jar file which is placed in the same folder with my dll file by cmd in windows os. But when I convert it in to exe with jar2exe tool and place the exe file and dll file within the same folder and execute it wont work. I have coded in my java file..... System.load(System.getProperty("user.dir")+"\\mylib.dll"); .... and I have also changed "user.dir" by "application.home" and tried it won't work too.

So please help me how do I get that work?

So, please pay attention to whether the 32/64bits matches the dll. The executable can only load the corresponding 32/64 bits of dll.

Hello Tech Assist, I'm just wondering if there's any possibility to encrypt and still retain/save as a jar file?

Some other customers requested the same feature, but now I have not found a way to implement this. I'm also trying to find an equivalent way which will not cause too much change to the original solution.

You can also take a look at http://proguard.sourceforge.net to see if it can satisfy you.

Welcome to contact me if any advices or problems.

I'm a linux user and I'm trying to develope my projects for windows, so I have a virtual machine where I want to have installed jar2exe. I have four licenses, but I had to format my computer keeping my virtual machine saved. When I tried to use again jar2exe, tells me that I have the limit reached, and I will not spent more money buying more licenses. What can I do to run jar2exe again?

By default, to activate on a new PC will be enabled after each month.

The register key is bound to certain CPU, so if you run the virtual machine on a different real machine, you need to re-activate it. Please contact me if you need to activate on a new PC but failed.

When I start converted programm, I have exception -  "Couldn't create URL for the file path : constant.ini",

where constant.ini - it's external file.  Although, runnable jar normaly find it.

According to your description, I could not tell exact the problem. There are 2 points to care about:

You can run generated exe file with Java 8.

The java version select dropdown on the step 1 is editable, you can type 1.8 by yourself right now.

I want to change my pass but all i receive is error PDOException: SQLSTATE[HY000]: General error ...

from you page your database is corrupted

Sorry for my late reply. The website was wrong on that day, and it was fixed on that day.

If your program is much different from the demo, please keep contacting me.

But I think your idea is good, I will try to let the external `option` to override corresponding internal one in the future.

I made an .exe and tried to scan it with virus total since most users check their software there before using it.

Aparently, an antivirus called Dr.Web calls out an Autorunner and marks it as a virus and my clients won't use it.

What can I do?

The generated exe file contains 2 parts: some binary code and a jar file, its structure is something like a self-extracting program. I don't know why 'Dr.Web' will regard it as a virus.

Please make sure you downloaded Jar2Exe from this site http://www.jar2exe.com/downloads , then you need not to worry about it.

Can you check why the EXE-files after creating by JAR2EXE has positive detection in some antivirus softwares?

This is not a problem JAR file, because that JAR-file should be encrypted and also doens't contain something criminal. This is a problem of loader.

I am usin jar2exe to convert my to exe. it is working fine.My requirement is i need exe file like that it always run using javaw instead of java.Could you please let me know how we can achieve by using jar2exe?.This requirement is because while executing i dont require to wait for response.

Generated exe file does not use 'java' to start, nor 'javaw', but it use 'jvm.dll' to start.

If you don't want the Console window to be visible, please select 'Windows GUI application' at step 2.

The images used as background for jframes and for jframe icons are not displayed after creating and running the exe file. Suggest a solution please.
Thank you very much for your message. There are 2 tips for 2 ways to add the image respectively:
1. Use "Thread.currentThread().getContextClassLoader().getResource()" to load the image if the image is in jar file.
If the image file is in classpath (in the jar file), you can load the image through ClassLoader.getResource(). Then please be careful to use this classloader "Thread.currentThread().getContextClassLoader()".
2. Use "System.getProperty("application.home")" to get the exe folder if the image is in disk.
If the image file is in disk, you select to load the file by full pathname. Then you can use "System.getProperty("application.home")" to get the folder of exe file.
I have write a demo program to show the background image and icon image, you can download here.
Please don't hesitate to contact me if your solution not succeed.

I see, that is because that there is an ".exe" in the zip file. So I have renamed the ".exe" to ".exe.rename", you can download again.

Hi, I was trying with this example but my program did not do the same, when it runs, my images did not show. Is there another solution for this?

Please use Thread.currentThread().getContextClassLoader() to load the protected resources, or use a "new Jar2ExeClassLoader()" to load.

If your problem not resolved, you can contact support@jar2exe.com for help. Or you can discuss with me on Skype live:sswater

I have generated a jar than runs fine on a XP machine with Java 1.7 (last version). But whe I convert it to an exe (especifiying JRE min ver 1.7.x_xxx and the same to max ver) I get the error: "Java Runtime Environment not valid" when i try to execute-it.
I've reinstalled Java several times with same results. I've no problem if I install Java 1.6 (and uninstall 1.7 ver!!!!!) and I generate the .exe  for 1.6 version.
Dear,
Don't hesitate to contact me if your problem not resolved.